THE BEST OF SARAJEVO

We unexpectedly fell in love with Sarajevo. It’s the kind of city that will both melt and break your heart.

Before visiting the capital of Bosnia & Herzegovina we didn’t really know what to expect. We knew a little bit about its history from visiting other parts of the country, but we debated whether spending time in Sarajevo was something we were really keen on. To be honest, it sounded a little dull and gloomy. We expected to arrive in a fume-filled city overshadowed by grey communist apartment buildings and not much else.

Upon arrival, we quickly realised that we were so very wrong. We came through the mountains to find a beautiful old town stretched out below us. Yes, there were a few communist buildings, but it was mainly beautiful Austro-Hungarian architecture lining the Miljacka River, and the skyline was pierced with minarets from Mosques in the Ottoman old town. After we got stuck winding our way around a few tight corners in our van and taking several detours to avoid cobbled streets that were practically vertical, we realised we had found ourselves a very special city. It remains one of our favourite places we visited on this trip.

THE BEST OF SARAJEVO IN 10 SITES

The old lunar clock from the central Mosque in the Old Town of Sarajevo was built in the 16th Century. Look at it and you will not see the time of day, but rather a count down until sunset prayer. As sunset occurs at different times throughout the year, the clock is manually adjusted twice a week by the same man that has been doing it for over 50 years. His father did it before him, and his son will carry on the tradition in years to come.

On Ferhadija St, in the middle of the old town, you will find the stones reading ‘meeting of cultures’ inlaid in the ground. If it wasn’t there to remind you to look, you might completely miss the sudden transformation of the street. If you look to one side of the marker you will be transported to Ottoman times: small merchant boutiques, traditional sweets houses, wooden frames, oriental carpets. If you look to the other side, the buildings are larger, richer, like wedding cakes of stone - a western legacy from Austro-Hungarian rule. It may only have been 40 years, but the Austro-Hungarian empire ‘modernised’ Sarajevo at an astounding pace.

Right across the river from the city hall, you will see a small whitewashed building with timber frames. During the Austro-Hungarian rule, city officials planned to turn Sarajevo into a ‘model colony’ - the epitome of a modern city. They decided to construct a beautiful new city hall, and began clearing the houses that were on the designated site. Unfortunately they ran into problems with a stubborn old man, who refused to leave his old ottoman house for any amount of money. Without clearing his house, the city hall could not be built. Eventually, after lengthy negotiations, the old man agreed to take a huge payout for the land on which his house was built - on the condition that the authorities not demolish his house, but rather move it, brick by brick, to the other side of the river.

Now a quaint Bosnian restaurant overlooking the River Miljacka, you can still see ‘Inat Kuca’ (or ‘House of Spite’) written on its facade.

Originally built in 1896, and converted into a library in 1949, Vijecnica was destroyed by Serbian shelling during the siege in 1992. Almost 2 million books (including rare historical documents and manuscripts) went up in flames. The beautiful yellow and orange moorish-style building on the river only reopened in 2014 after a long and difficult reconstruction. It now houses a few exhibitions, including the priceless Haggadah, an exquisite medieval Jewish manuscript. The manuscript itself has an amazing history: when Nazis occupied the city in 1941, the Haggadah was the among the first objects they sought out, however it had been cleverly hidden away by the director of the National Museum. Its location remained a mystery until after the war, when it reseurfaced at the museum (now a library) and remained there until the siege. When the building was destroyed, the manuscript was rescued from the flames by the head librarian and several police officers. It was transferred to a vault in the National Bank until it could find a permanent, safe home. 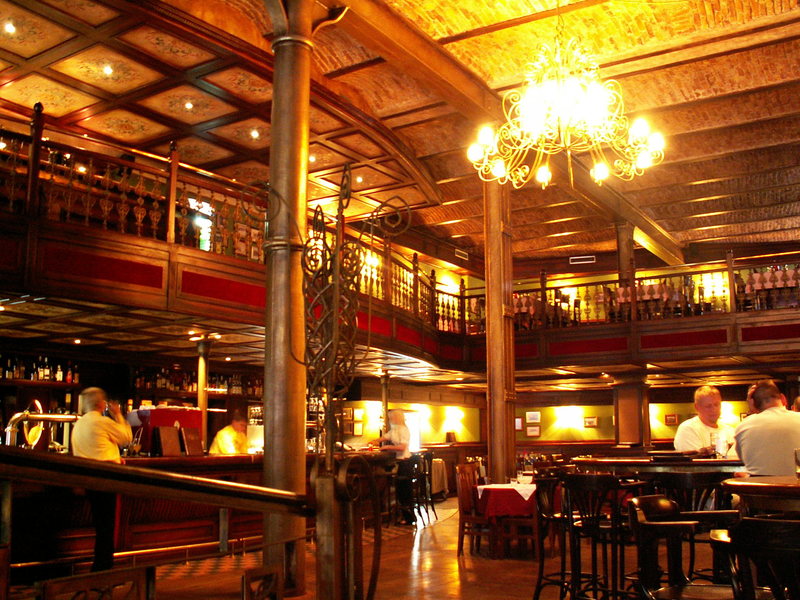 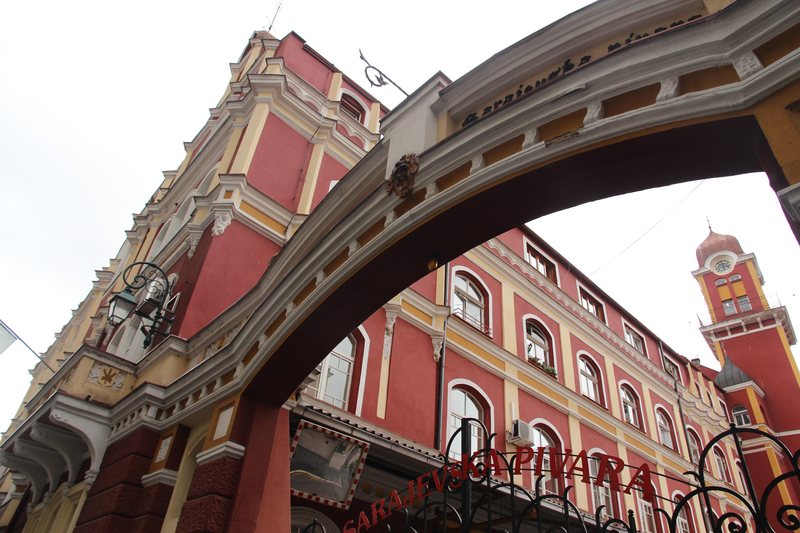 Sarajevo’s brewery has been crafting beer for about 155 years. It never stopped, not even during the war. Between 1992-95, the citizens of Sarajevo would risk their lives to visit the brewery two or three times a week. Not for beer, but for water. The brewery is built over a well, and therefore has access to its own personal freshwater system which helped keep people alive during the siege.

Okay, the bridge itself is nothing special, but it is an easy way to find the plaque that commemorates where Archduke Franz Ferdinand was assassinated in 1914. This was the assassination that would form the catalyst for WWI. Interestingly, he wasn’t assassinated on his first open car trip down this street beside the Miljacka River. The initial plot involved 7 assassins, stationed along the road, ready to make their move as the archduke and his wife drove past in their open-topped car on the way to the city hall. The first of the assassins failed in his attempt (his bomb bounced off the folded up roof of the open car and then rolled underneath the wrong vehicle, injuring some bystanders. He then he jumped in the river to drown himself, only to find it was much shallower than he anticipated, and he was quickly apprehended). The following 6 assassins had been freaked out by the incident, and they all failed to act as Ferdinand rode past, therefore missing their opportunity.

Following the meeting at city hall, Ferdinand insisted that they go immediately to the hospital to visit those injured in the attack. It was on this return trip (still in the open-topped car) that the infamous Gavrilo Princip spotted Ferdinand and his wife while he was (apparently) eating a sandwich in Schiller’s Delicatessen. Seizing the opportunity he dashed out of the cafe and completed the assassination in two shots. In this spot, you will find a commemorative plaque placed on the wall. 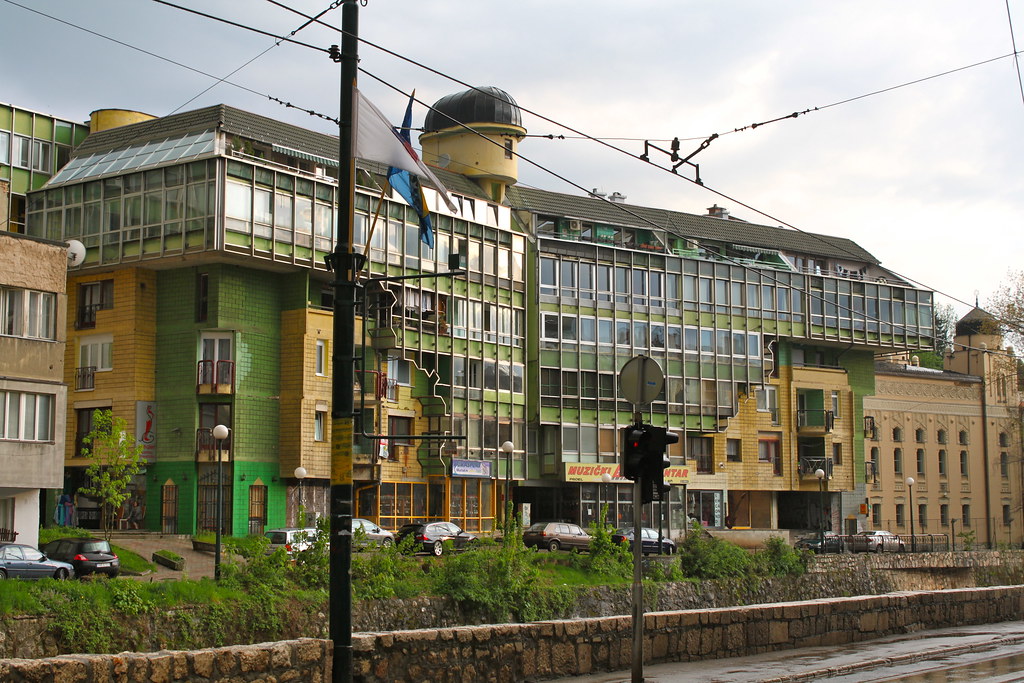 Also known as the ‘ugliest building in Sarajevo’, the bright green and purple and yellow apartment building was built just before the 1984 Winter Olympics to show the world that communist architecture wasnt all grey and grim...it could also be really really...‘funky’...

The apartment building divides viewers - but the general consensus amongst Sarajevans is that it is completely hideous, especially as it stands in stark contrast to the beautifully elegant Austro-Hungarian buildings on the other side of the river.

In 1984 Sarajevo proudly hosted the Winter Olympics. It was a huge deal for the communist country, and even now remnants of this pride remain (the Olympic rings have been built into buildings, Olympic souvenirs are still sold, the buildings erected for the occasion still stand tall and bright). Just outside of the city and high up in the surrounding mountains (it’s a serious hike - most people opt for the cable car) you will find the old bobsled track. Now abandoned and broken and overgrown with vines, moss, branches, and soil, a visit to the old relic is an eerie experience and a haunting reminder of a more prosperous, hopeful time for the city. The 1300m long concrete tube is also a magnet for graffiti artists from all over the world, who come to leave their mark.

Not far from the track you can also find the shell of an old observatory on the hill, which you can climb for spectacular views of the city below. Just be careful to stick to pathways, as the surrounding hills are still peppered with unexploded mines.

Sniper Alley isn’t really an ‘alley’. It’s actually a wide boulevard that became notorious for (you guessed it) snipers. The boulevard ran between the city centre and the newer suburbs, and its width and position put it in full view of the surrounding hills occupied by Serbian snipers. Hundreds of people lost their lives on this street (including children) and more than 1000 were injured. Today, Zmaja od Bosne Street and Mesa Selimovic Boulevard look like very normal strips of road. If you didn’t know the history of this place, you could just walk along with your head down and fail to see the shell-holes still scarring some of the buildings, or feel the shivers of the horrors that happened here.

Right on Sniper Alley you’ll see the iconic orange and brown of Hotel Holiday. Originally built to host visitors for the city’s Winter Olympics in 1984, the hotel ended up playing a huge role during the siege. The area around the hotel was one of the most dangerous in the city. From here, you were pretty much on the ‘front line’ of the conflict. Hotel Holiday is where international news agencies based themselves and broadcast to the world amidst gunfire and shelling.

Throughout the city you will find many places where the pockmarked stone on concrete under your feet has been wither painted red or filled with red resin. These are called ‘Sarajevo Roses’. Rather than fill in or replace the concrete that was damaged from shelling during the siege, these scars form simple yet powerful memorials throughout the city. When you know about them, you will come across many, often unexpectedly. There are around 200 in the city, some of which are slowly fading or fragmented by new building or road repairs, but there are also some that hold particular significance. The Sarajevo Rose in the middle of the Markale Market, for example, commemorates the shell that killed 68 innocent civilians and wounded 144 as they tried to buy food for their families. Outside the marketplace you’ll find another rose, from a second attack, that killed 43 residents and wounded 84. On average, around 300 mortar shells his the city per day during the siege. The roses are a confronting reminder of the past that garner mixed feelings from local people. Some see them as a floral homage, while others see them as gaping wounds that will never heal.

BEST THINGS TO DO IN ROME (BESIDES THE USUAL...)